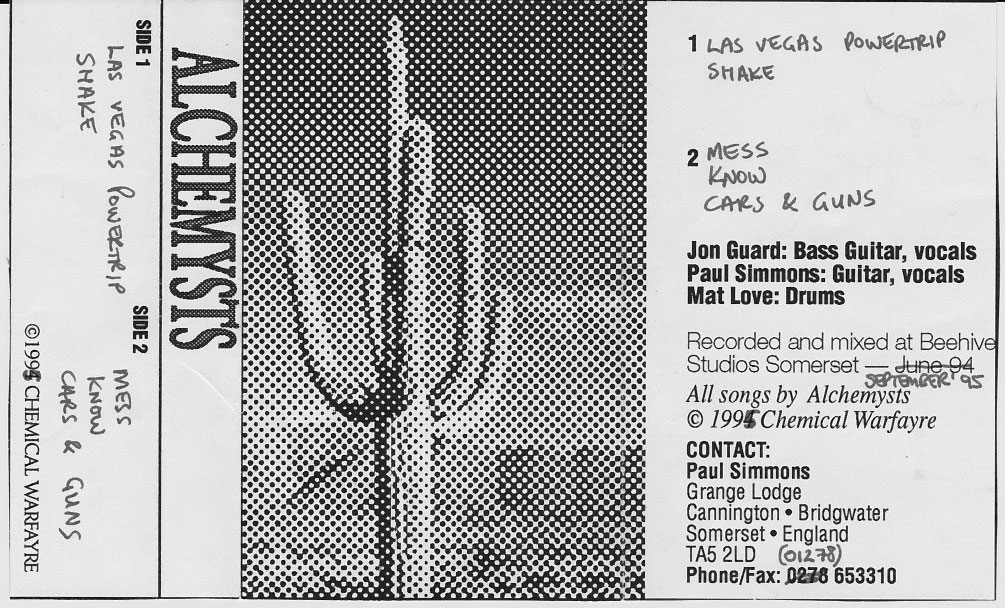 This English psych-stoner-garage-rock cult band emerged out of rural Somerset in 1995 with One Eyed Again, a collection of songs recorded at their home Beehive Studios between November 1991 and April 1993. That was followed by Over And Out in 1998 on the Australian label Camera Obscura. Two LPs appeared in 2000: Zero Zen, released in the UK on Woronzow and on Rubric Records in the states; and Simeon & The Alchemysts, a collaboration with experimental electronics pioneer Simeon Coxe of the Silver Apples.

We’ve not heard anything from Alchemysts since, although Guard, Simmons, and Love have all collaborated at various times with Nick Saloman’s The Bevis Frond; Simmons has been a steady member on guitar for the past several years, and currently co-hosts a radio show with Salomon on MIT’s WMBR-FM.

Amid all of the above appeared this incredibly obscure tape, with its curiously crossed-out and corrected recording dates and copyright year; I’ll bet there’s a good story behind that. None of these songs ever made it onto a proper release, which is baffling, because this is great stuff. Maybe someone will take notice and remedy that.