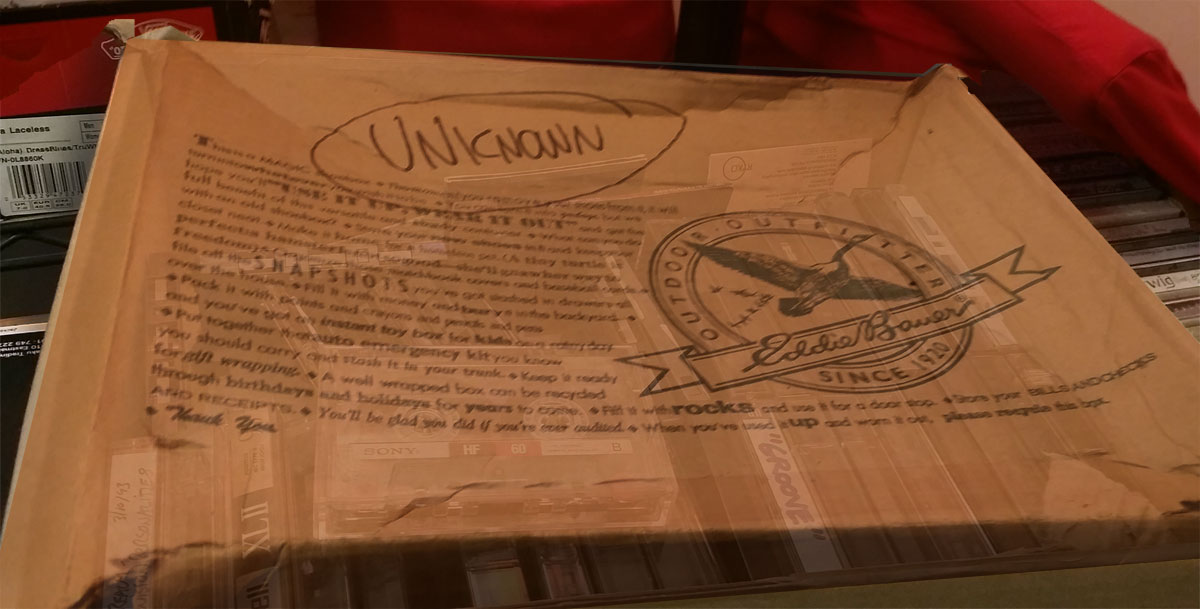 Welcome to Episode Three of Mystery Friday! Time for another plunge into the box UNKNOWN.

Tonight’s tape is a Scotch BX 90 135m Normal Bias. Scotch brand cassettes were not commonly used during this Universe; Memorex was much more popular at that time. And I can hear why — the spools rattle like mad as I fast-forward to limber up the tape.

In any event, the cassette is in brand-new condition, the j-card has but a few scratches, and it is not marked in any way. I haven’t a clue what’s on this. And neither do you. Let’s listen!

1) It’s Tang S’Dang! My power trio with Ricky Street and Frank Patterson. This is an instrumental version of “Mr. Misunderstood”, one of my favorite songs that didn’t make it onto an album. This is a smokin’ take, too.

3) “Marie and The Minotaur” This song of mine goes back to Techno-Peasants, the mid-80s band I had with Vinnie Fabiano and John Mazza. It’s a lyrical mashup of Bob Dylan, Pablo Picasso and Homer’s Odyssey. This sounds great. But we only released “Marie” as a live version on Bigger & Harder. Are these rehearsal tapes? Studio roughs? Not sure.

4) I forget the name of this one. Punky rockabilly, like Ricky loved and still does. It’s really fun to hear the instruments so clear and clean.

5) “I Turn Into You” Another frantic spastic toon by yours truly. Also dating from the Techno Peasants era. This is an early recording for sure. Way before the first album. 1987?

6) “Carnivores” I always loved this little song of mine. Nice changes on this. Good energy on the middle eight. We waited too long to put out an album, I have to say.

7) “Love/Hate” Geez, I have a lot of songs on this tape. Killer take on this, yes, unreleased tune. Damn.

8) “The Love You Thought You Found” A fab collab between Ricky and me. One of our best songs, oh man, this take is kicking. Why the fuck didn’t we release this? And where are the vocal stems???

9) “Enough To Say” Smokin little blues rock number that I always loved to play. Get my Humble Pie on. This recording sounds and feels very much like a live performance. Whoever recorded it did a great job.

10) “Dominoes” OK this one we released, on ALB. Always a favorite. I was just starting to get into African music, can you tell? Frank is brilliant here. This is so much better than the album version! I am losing my mind.

11) “Tiger By The Tail”. This became one of our signature tunes for some reason. I have mixed feelings about it, but that’s my problem, not yours. This is a solid instrumental version, despite a weak solo from this guy.

12) Wow, what is this? Definitely a Ricky song. Awesome changes! Intricately arranged power pop. Patterson is a monster. I fuck up. (Update 4/9/2016: Ricky identifies this as “Cathy Cried A Snowball”)

Jim: “Still running.”
Ricky: “I think that’s about it for this side.”

1) “Cupcake Man” The CBGB live version on BAH hits harder, and has vocals. But this is fine.

2) “Boys And I” Audio problems at the start. Distorted hi hat. Calms down once we get into it. Another tune we did at CBGB for BAH. This tape is shaping up to be a record of our entire repertoire.

3) “Empty Boxes” Nice tune. Released on the first LP. My lyrics are silly, but this is an instrumental, so lucky you! Good guitar solo by El Santo.

4) Yow! Another great, forgotten tune! No clue what this is, but it’s kicking my ass.

5) “Nine On The Spine” Top 10 fave of songs I have written, and we play it perfectly here. I should release this as a single!

6) Ah geez, what is this? Another great power-pop song. We played this a zillion times. Balls.

8) Nope, no clue. We obviously knew it well, ’cause we kick it down the street.

15) “Long Run” If I hadn’t heard the title, I wouldn’t have remembered. But I did, and I do, although I could not recite the lyrics, even though I wrote ’em

5 thoughts on “Mystery Friday Number Three: I Know You Are, But What Am I?”